Halo-lit by the setting sun, a hulking cumulus cloud looms in the sky like a bulbous atomizer for the Fishkill Creek. The funky summertime fragrance fills my nostrils as I soar down Tioronda Avenue on my bicycle. Along dormant railroad tracks, encroaching development in the form of luxury housing spreads over the abandoned industrial landscape like a modern pestilence. The lambs ear and sumac and occasional dumped sofa are standing their ground for now—and I am rooting for them. (Well, not the sofa.) A whip of wind and gnats and honeysuckle helps to create a miracle: my sixty-four-year-old body is still able to reclaim that giddy feeling of endless summer.

I have been reacquainting myself with my art studio for the last week—a 1920s brick garage that was a large part of the reason I moved upstate from New York City nearly seventeen years ago. It’s been a constant battle with the carpenter ants who have had squatters’ rights since time began. A recent tar-and-patch on the roof’s perimeter has given me the (most likely false) hope that maybe this time I can get the upper hand. 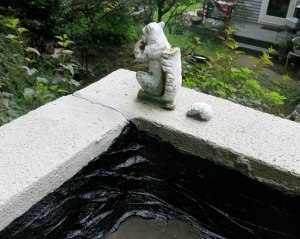 So, I am back to assemblage art. I wanted to start small, both in scale and concept. While the setup was initially an homage to my paternal grandfather and the workshop he kept in his basement, this summer I am feeling the spirit of Pappaw DeWalt, my mother’s father. He had built a small, seasonal cabin (known as “the cottage” for some reason, but let’s not envision cobblestones and roses!) out of scavenged Stroehmann’s bread billboards. My dad and uncles would cart the building materials to the island in the Susquehanna from the tiny hamlet of Cly before my memories of summer even began. By the time I was nicknamed “Peapicker” by Pappaw, matching his motorboat, I was happily ensconced in that simple, idyllic setting.

It was less than a half-hour drive, and yet a world away from our suburban backyard and asphalt playgrounds (where we could easily crack our heads open with one faulty swing on the monkey bars). The cottage was at the very end of the island, which felt like the tip of my entire world, as I spread out on a doll blanket and memorized picture flash cards with all the butterflies and birds, or read the latest Nancy Drew. There was a small dock for the boat and jumping off into the chilly, murky river. Wooden steps led up to a screened-in porch where I loved to sleep on a metal cot, but the rustic interior I barely remember at all. Maybe an enamel-top table, an arm chair—but who wanted to be inside during summer?

Pappaw and Nana DeWalt had traveled—camped!—across some of the United States, and he always brought back a souvenir for me. A fossil, some fool’s gold, and from one trip in 1957, samples of dirt. Sixty years later they are lined up in my studio, their masking tape labels still legible: Wyoming, Cedar Rapids Iowa, Hinkley [sic] Illinois, and “50 MI west of Lincoln NEB.” To christen the rebirth of my creative workspace, I decided to give them a little more of a presentation, using materials that evoked feelings of the cabin on the river, and of a time when feeling dirt underfoot and memorizing Latin names for butterflies was really all a girl needed to pass a long, summer’s day.

3 removed and mounted, 4 to go

experimenting with backgrounds to mount the dirt samples 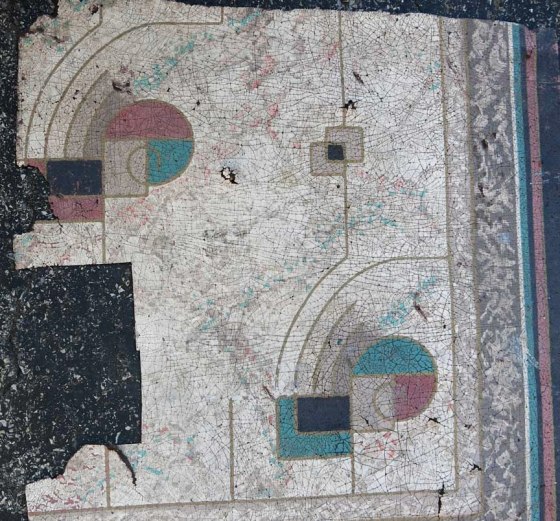 a nice sheet of aging linoleum that evokes the cottage, warming up in the driveway

cut down to the size of pre-cut masonite (done years ago by Pappaw Watts . . .for what?)

This one goes to Pappaw DeWalt’s great-grandson, Mike, and his wife Charlotte, who live in Wyoming. Passing the dirt!