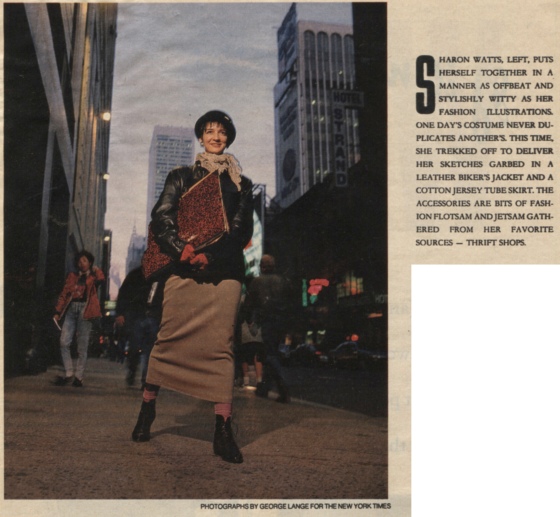 In 1991, I was being photographed in front of The New York Times building on West 43rd Street, its globed lamps and distinctive typeface serving as focal points while prompts were called out by the photographer, George Lange. My large art portfolio was wedged under my arm, tight against my leather biker jacket-clad torso. With my Great Aunt Lenora’s crocheted scarf cocooning my neck and a tube skirt snug around my legs, I strode down the block like I owned it. Looking slightly up, my face was captured in a smile, crimped along the edges with a bit of self-consciousness. 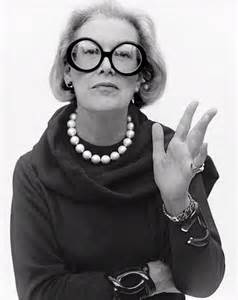 I was chosen by The New York Times fashion editor Carrie Donovan—a character right out of the Audrey Hepburn classic film Funny Face—for a Sunday Magazine feature story about Manhattanites deemed to have personal style. Carrie, in her ubiquitous black and leopard prints and super-sized accessories, saw me once a week in whatever ensemble I had thrown together that day; I was also the illustrator she had chosen for her By Design column that appeared Tuesdays in the newspaper’s Style section.

I would enter the mythic, monolithic building from the street and head over to a line-up of phones on a marble ledge, waiting to be called into their roles as liaisons with people higher up in this bastion of journalism. Dialing Carrie’s extension, I passed the receiver to a security guard, then got the nod to go through the turnstiles and over to the elevators. Once I landed on nine, I made my way through a moat of bullpen cubicles, then was given the signal and admittance to Carrie’s inner sanctum. Now I would experience the heady feeling of being the center of her universe for ten minutes, as I presented my art for her approval.

Sometimes, if she was just finishing up the story, I had to do the job entirely on the spot. This last minute deadline would send me around the corner to the design department to borrow art supplies and a surface to work on, a pearl-encrusted fashion gun to my head.

My weekly gig was fun, sometimes stressful, but most of all, a fulfillment of destiny. I had promised myself when I was a teenager that I would one day be in The New York Times. I had meant my artwork, but here I was, like Marlo Thomas in That Girl, and Mary Richards in The Mary Tyler Moore Show, in love with my job, my life, and most of all, my city.

I did this for nearly a decade, during which time Carrie eventually retired and passed the reins of By Design to Anne-Marie Schiro, and The Gray Lady went to color. I still was making my weekly rounds, in person.

That wasn’t Carrie’s final act, however. She went on to be a surprise hit in Old Navy TV ads.

On November 12, 2001, Carrie passed away. I hadn’t noticed, hadn’t realized, hadn’t wondered until much later. I was too caught up in post-9/11 and missed her obituary. When I found out, I was dismayed that this grande dame had quietly left the stage without my being able to say au revoir.

So I’ll say it now. It was a pleasure working with and for you, not a bit de trop, and always divine.

6 thoughts on “Carrie Donovan & The Gray Lady & Me”